We are nothing but our stories. And, that’s what director Imtiaz Ali explores through his staggeringly stunning canvas, where his man and woman are united in love, but divided in their worlds. Yet, their story finds meaning, when they break away from their moulds and empower themselves. “It’s our story. We can change ‘the end’,” voices the man. Much like his every work, ‘Tamasha’ too is anchored at the heart, but unlike the others this one has fewer pretensions. It’s possibly one where Imtiaz bravely surrenders to his craft. While his non-linear narrative template might appear rather indulgent, and possibly punctures the pulse of the movie, he manages to salvage it beautifully. A tighter edit would’ve gone a long way in uplifting the film, but that’s a flaw we are willing to overlook because he doesn’t adulterate his drama with quintessential Bollywood tricks, and plays it by his rules. There’s also a slight disconnect with the corporate world Imtiaz’s designed. Turning the boss into a tie-loving monster, makes his character sketch rather skewed. The part where he watches wide-mouthed as his junior rambles away Bollywood dialogues appear unintentionally exaggerated. Or, when a boy and a girl refuse to indulge in a little hanky-panky, it appears strangely righteous. 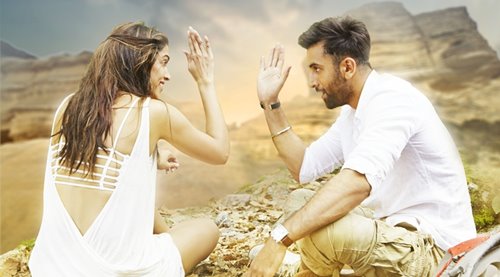 That apart, ‘Tamasha’ works because of its two incredibly talented performers. Each feeding off each other, and challenging each other at every moment. Not a note too high, or too low. They are pitch-perfect. Ranbir Kapoor and Deepika Padukone display unparalleled talent. While the spotlight is deservedly on Ranbir, Deepika lends him the perfect backing. Some of the movie’s most striking moments are penned on them. Their reunion in Delhi is gushingly delightful, while their conflict pitched against a massively colourful background with their voices muted out is hard-hitting. It’s the agonizing moments as Ved erupts fiercely when cornered before the track ‘Agar Tum Saath Ho’ plays out that’s the most heartbreaking. Ranbir lends immense depth to Ved’s charm and complexities, as he innocently lives a life that’s not his. You watch in awe as he exposes his angst in front of the mirror, almost wishing his reflection would step out and set his world right. Or, when he breaks into random lines while mouthing his presentation or begs an old storyteller to help him unscramble his mess.

Or, when he narrates his anguish to his controlling father. Ranbir outdoes himself, as he unhurriedly breaks down Ved. It’s during the monologues that he soars. Deepika too wins applause for her matured take on Tara. Despite landing with a weak back story, Deepika manages to own Tara with dignity and poise. She excels when she finds a broken Ved outside her apartment in the dead of the night. While the supporting cast are left in the dark, with not much to say or do, it’s the little Ved who manages to win us. Barring uncanny resemblance to his on-screen senior, it’s a delight to watch him feed on a massive diet of stories. Ravi Varman’s frames are spectacular, with Japan, Corsica, Shimla and Delhi captured in such magnificent frames. AR Rahman’s tunes, while not outstanding like his earlier work, isn’t reduced to mere dance numbers, and are interestingly interwoven with the screenplay. When an autorickshaw driver renders ‘Wat Wat Wat’, while recounting how he was forced to shortchange his dreams, you grasp the power of his music. It’s interesting how Imtiaz subtly uses “bipolar” in the vocabulary of ‘Tamasha’, possibly hinting that Ved isn’t the only one living a conflicted life. And, that’s reassuring, as well as arresting.