The nights draw in, and the stars come out. Before Christmas, we’ll see Priyanka Chopra waging war in the historical epic Bajirao Mastani and the Shahrukh Khan-Kajol Devgan dream team reunited for Dilwale, yet it may turn out that Tamasha will need its stars, Deepika Padukone and Ranbir Kapoor, most – just as points of recognition. With its self-reflexive title (“Spectacle”) and avant garde theatrical wraparound, Imtiaz Ali’s film is about as tricksy – and tricky – as Bollywood gets, its debt to modernism flaunted from the start in an opening splurge of stories within stories within stories. Only when our leads show up do we know whose tale this really is. Or do we? Even after Padukone and Kapoor appear, as backpackers falling in love against a fairytale Corsican backdrop, something about Ali’s arch dialogue – all quotes from, and references to, previous love stories – strongly hints these are archetypes, aware that their fate is to be separated, then reunited in time for the credits. The resistance to conventional characterisation is such that there’s a (not unenjoyable) suggestion the performers are playing themselves: hot-to-trot actors messing around on location. When Kapoor introduces Padukone to the patrons of one bar as a major Indian movie star, we’re not so far from Julia Roberts impersonating herself in Ocean’s Twelve. Tamasha keeps shapeshifting, in ways both intriguing and self-defeating. When our lovers next meet, two years later in Delhi, they could be completely different people: a newly ponytailed Padukone sober and serious, Kapoor a corporate drone missing all traces of his prior spark. 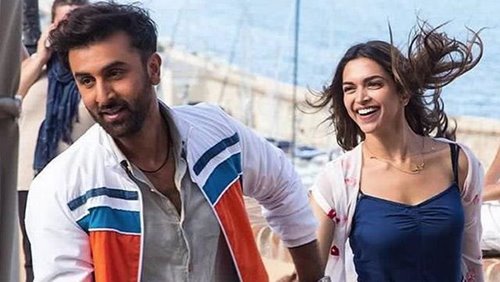 Ali’s exploring the much-unpicked idea that we play different roles at different times, which is why he returns to the stage as a metaphor for life. Yet it’s a liability when a movie turns its leading man into a colossal bore at a penstroke, when its characters too closely resemble marionettes at the mercy of an off-screen puppeteer. Prem Ratan Dhan Payo’s play-acting was simpler, but far more emotionally rewarding. To his credit, Ali keeps us semi-interested. He rightly senses he can set Padukone to do nothing more than quietly read Catch-22, and three-quarters of his audience will be happy enough. Different styles are found for the various stories: loose and dreamy for the Corsica scenes, something more clipped and naturalistic for Delhi, emphasising the Kapoor character’s deadening prework routine while effectively embargoing any merriment. Here, the one number in AR Rahman’s typically lush if naggingly unmemorable score gets put over by a lowly covers band, and taken up by a street beggar. In the absence of a hero, the songs drift elsewhere. Even as this bold experiment fizzled out – and it really does in the second half, as Kapoor pursues a cure for his dullness, sidelining Padukone – I retained some admiration for its ambition. The urge to deconstruct still feels unusual in this context; it’s not every week a Hindi film reminds you of early Resnais. The stars commit to the conceit, playing off one another better than they did in 2013’s birdbrained Yeh Jawaani Hai Deewani. Yet all that Tamasha’s cool cleverness achieves is to get in the way of rapture. When a film is so insistent on telling us that what we’re watching is all story, and just a story, what chance do we have of surrendering to it?