Will Priyanka Chopra steal the show from Deepika Padukone?

Is it just a mere coincidence that just days ahead of the release of the eagerly awaited Bajirao Mastani where the Great Clash between warrior-lovers Ranveer Singh and Deepika Padukone is destined to happen, a new song 'Albela Sajan Aayo Re' from the film shows Priyanka Chopra dazzling us with her vivacious dancing. As for those adoring glances that she darts at 'Bajirao' Ranveer Singh ...this is a woman in love. No two ways about it. The song filmed in sublimely saturated colours of joy and ecstasy, is a celebration of home-coming. The wife breaks into a dance of rejoicing as her warrior-husband returns ...The song is in the tradition of Lata Mangeshkar's 'Ghar Aaya Mera Pardesi' from Aawara...Or Kavita Krishnamoorthy's 'Mera Piya Ghar Aaya' from Yaaraana. Priyanka's expressions of ebullience are incredibly infectious. So far we've seen very little of her in Bajirao Mastani's trailers. 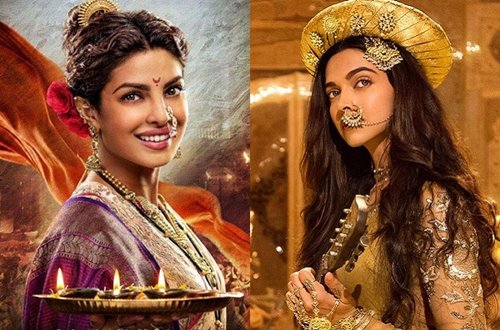 In the first song 'Deewani Mastani' Deepika Padukone took center stage as the woman who seduces the Warrior-Ruler with her dancing. Priyanka had just one shot to herself where she looks down at the scene below of her husband's keen interest in another woman. In that one shot Priyanka's expression of tragic grace was exceptional. Then came the controversial 'Pinga' song where in the jugalbandi Priyanka completely out danced Deepika. And now in the 'Albela Sajan Aayo Re' song and dance she is a portrait of feminine finesse and spousal pride. So the question...is Priyanka Chopra going to prove the scene stealer in Bajirao Mastani although she doesn't have the author-backed title role? It has happened in the past that an actress has stolen up on her prominent co-stars and walked away with the praise. In Yash Chopra's Daag the entire focus of interest was on the tried-and-tested Rajesh Khanna-Sharmila Tagore pair. But it was Raakhee who got all the acclaim and the awards. Is Priyanka all set to do a Raakhee Gulzar on Deepika? We shall have the answer in just a few days.