And the Dishoom boys are BACK! Well, Varun Dhawan and John Abraham, who were shooting in the Middle East for their upcoming film, Dishoom are back in Mumbai. The film, directed by Varun’s brother, Rohit Dhawan, is an action film and from the looks of the actors, we’re quite sure that it’s gonna be rockin’! The entire cast of Dishoom has been undergoing a lot of gymming thanks to the director’s will to make them look action-ready. In fact, recently Varun Dhawan put up this insanely cute video of himself encouraging John Abraham as he worked out. Yes, it definitely made us wish we picked up our gym shoes and rushed to get some calories burnt out. And honestly, the stills and videos that the Dishoom team is sending out is making us jealous and excited at the same time! 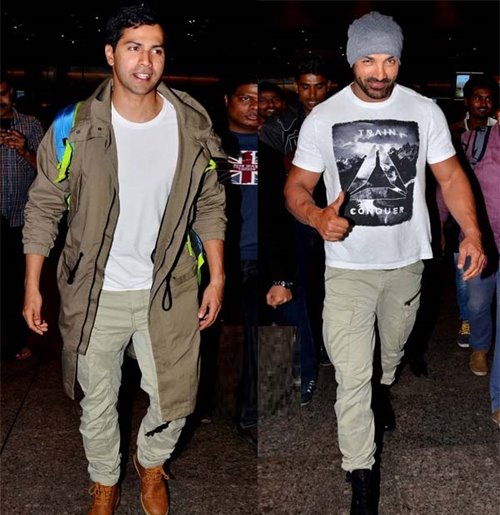 This is the first time John Abraham and Varun Dhawan will come together and surely they seem to be bonding quite well. John, who has a lot of action films coming up this year, with Rocky Handsome and Force 2, looks like he’ll be taking up the tag of action hero of Bollywood, don’t you think? Well, we’re totally lovin’ the workouts that’s going on behind the scenes of Dishoom and hopefully the same will be reflected in the film as well. So when the duo were spotted in the airport last night, Varun donned this trenchcoat that looked super comfortable while John carried along with his binny, this swag and killer smile!