Reema Lagoo dies after suffering cardiac arrest, she was 59

Reema Lagoo Known for playing mother's roles in films such as Hum Aapke Hain Koun and Maine Pyaar Kiya, veteran actress Reema Lagoo passed away on Thursday morning after a heart attack. She is survived by her daughter and son-in-law. Veteran actor Reema Lagoo died early on Thursday morning after suffering from a cardian arrest, she was 59. Her family confirmed that she died at 3.15 am on Thursday after suffering a heart attack at the Kokilaben Dhirubhai Ambani Hospital in Mumbai. Her son-in-law Vinay Waikul confirmed her death and said, “She was fine but complained of chest pain around 1 pm. We took her to hospital but she dies around 3:15 am after a cardiac arrest.” Known for playing mother’s roles in blockbusters such as Maine Pyar Kiya, Aashiqui, Saajan, Hum Aapke Hain Koun, Vaastav, Kuch Kuch Hota Hai and Hum Saath Saath Hain, Reema Lagoo had also done extensive work on television including Shrimaan Shrimati and Tu Tu Main Main. In fact, the actor was doing a show made by Mahesh Bhatt, Naamkaran, at present. She played a negative character on the show, which was a far cry from the mother’s roles that defined her film career. 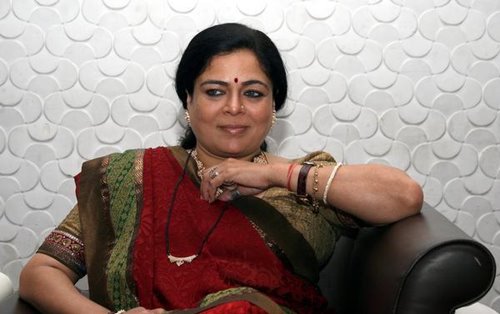 Talking about the loss, Mahesh Bhatt tweeted, “We said goodbye to one another after making a promise to meet soon. That never happened . We think we have time. We don’t!!Goodbye Reemaji.” Born Gurinder Bhadbhade, she was daughter of Marathi stage actress Mandakini Bhadbhade. While her acting prowess were noted even when she was a student in Pune, she started acting on stage after completing school. She soon started acting in Hindi and Marathi film. She gained prominence once she started doing mother’s roles in Hindi films, the first of such character roles was as the mother of Juhi Chawla in Qayamat Se Qayamat Tak. In fact, after playing Salman Khan’s mother’s roles in multiple blockbusters, many thought of her as his real-life mother! Another of her famous role was as Sanjay Dutt’s mother in Vaastav who kills her son. Reema Lagoo won four Filmfare awards in the supporting actress category. She was married to Marathi actor Vivek Lagoo, the couple separated later. The couple has a daughter, Mrunmayee, together who is also an actress. Her funeral will take place later today.