Indian cricket Zaheer Khan & Indian dancer Isha Sharvani close together: Here’s some bad news for all those girls who have been dreaming of getting married to Indian cricket’s bowling spearhead Zaheer Khan. The handsome cricketer, who was the leading wicket taker in the World Cup tournament, has finally decided to bowl a maiden on his personal front! 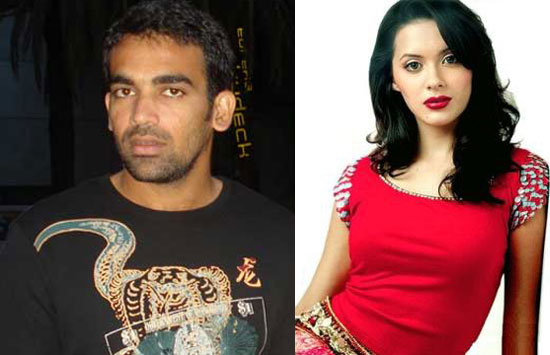 Buzz has it that the hunk’s parents are keen to see their son entering matrimony, and are in no mood to let him cling on to his single status. And the lucky lady to turn his bride is none but his long time girlfriend Isha Sharvani.$HOME$

The duo met sometime in 2005 during an event and had been in constant company with each other. However, the two decided to call it quits following certain differences. But as they say, true love never dies, the two lovebirds reconciled only to strengthen their bond even further.

The pretty damsel, who began her Bollywood career with Subhash Ghai’s ‘Kisna’ opposite Vivek Oberoi did not deny this news when contacted by a tabloid. Nonetheless, she preferred to keep it simple by saying, “I really don’t want to comment on this.”Well, we must say Zaheer has had a great start to this year- from becoming the leading wicket taker (position shared by Pakistani Cricket captain Shahid Afridi) to becoming a groom-to be…...