Bollywood superstar Aamir Khan said that he is feeling insecure in India over the recent incidents of intolerance and his wife Kiran Rao has recommended that they leave the country. Aamir, speaking during at a ceremony in New Delhi, extended his support to the people who returned their national awards as a sign of protest against the increasing cases of intolerance in the country. "A number of creative people - historians, scientists - increasingly had a certain feeling in them, which they felt they need to express. For creative people, one of the ways of expressing their dissatisfaction or their disappointment is to return their awards. I think that's one way of getting your point across," he said. "As an individual, as part of this country as a citizen, we read in the papers what is happening, we see it on the news and certainly, I have been alarmed. I can't deny. I have been alarmed by a number of incidents," Aamir added. 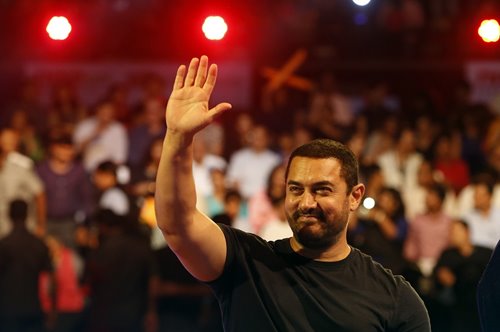 He said that his wife Rao has suggested that they should leave the country. "When I chat with Kiran at home, she says 'Should we move out of India?' That's a disastrous and big statement for Kiran to make. She fears for her child. She fears about what the atmosphere around us will be. She feels scared to open the newspapers every day. That does indicate that there is this sense of growing disquiet, there is growing despondency apart from alarm. You feel why this is happening, you feel low. That sense does exist in me", the 'Dangal' star said. It should be noted that Aamir voiced out his opinions several days later when Shahrukh Khan had spoke against the increasing intolerance in the country. "There is intolerance, there is extreme intolerance, there is I think, there is growing intolerance," Shahrukh had said. "It is stupid. It is stupid to be intolerant and this is our biggest issue not just an issue. Religious intolerance and not being secular in this country is the worst kind of crime that you can do as a patriot," he added.